It contributes to the transportation of 9.4 million tons of cargo in 2019, integrated into the Arco Norte. It moves 8% more compared to 2018.

Among its characteristics is the fact that it is the main means of flowing the production of grains such as soybeans, corn and sugar from the plantations of Mato Grosso, Rondônia and southern Amazonas for export via Itacoatiara (AM) and Belém (PA), as well as fuels and fertilizers to Porto Velho and Manaus, food and products produced in the Manaus Free Trade Zone.

The waterway allows the navigation of large convoys, with up to 18 thousand tons, even during the dry season. The width varies between 440 meters and 9,900 meters, and the depth varies according to the dry and rainy seasons, and can reach 13 meters.

It integrates diversified actions around the rational use of water, the protection of biodiversity, and the shared management of the multiple and integrated use of surface and underground water resources, in order to generate water sustainability in the state.

The government has already finalized a project to hire consultants to offer sustainable solutions. The consultancy will point out measures capable of recovering the springs and ciliary woods of the existing water courses within the State’s micro watersheds.

The project’s priority is the watersheds of Araras River in Cerejeiras and Palmeiras River in Espigão do Oeste.

In this way, the government intends to improve the quantity and quality of water in these municipalities, besides making the population aware of the good use of water resources and water management.

The Madeira River, the main tributary of the Amazon River, is 1,700 km long in Brazilian territory and has an average flow rate of 23,000 m³ per second. It is formed by the rivers Guaporé, Mamoré and Beni, originating in the Andean highlands, and has two distinct stretches in its course, called the Upper and Lower Madeira.

Reborn of the Waters Project

Its object is the diagnosis of the areas of springs and Permanent Preservation Areas (APP), followed by actions. Currently in many municipalities of the state, there are public supply problems caused by the lack of water in several micro watersheds that are directly related to the anthropization of riparian forests of springs and waterways.

To mitigate this problem it is necessary to recover these PPAs.

Rio Araras in Cerejeiras and Rio Palmeiras, in Espigão do Oeste, are examples of these environmental diagnoses, besides rivers, like Ribeirão Cacau in Alvorada do Oeste and Igarapé Tinguí, in Alta Floresta do Oeste.

In 2020, diagnostic studies were started for the Boa Vista River, in Ouro Preto do Oeste, and the Córrego das Areias River, in Nova Brasilândia d’Oeste.

The idea is to carry out an environmental diagnosis for the subsequent recovery of the springs and riparian forests of the water courses that make up these basins, minimizing the problem of water shortage that some municipalities in the state currently have.

In the last three years, Rondônia has expanded the area destined to pisciculture and, currently, it has around 16 thousand hectares of water mirror and more than four thousand producers registered with pisciculture in Rondônia, according to the State Secretary of Environment (SEDAM). In total, there are 25 properties registered as fingerling producers, with open sales to all of Brazil. 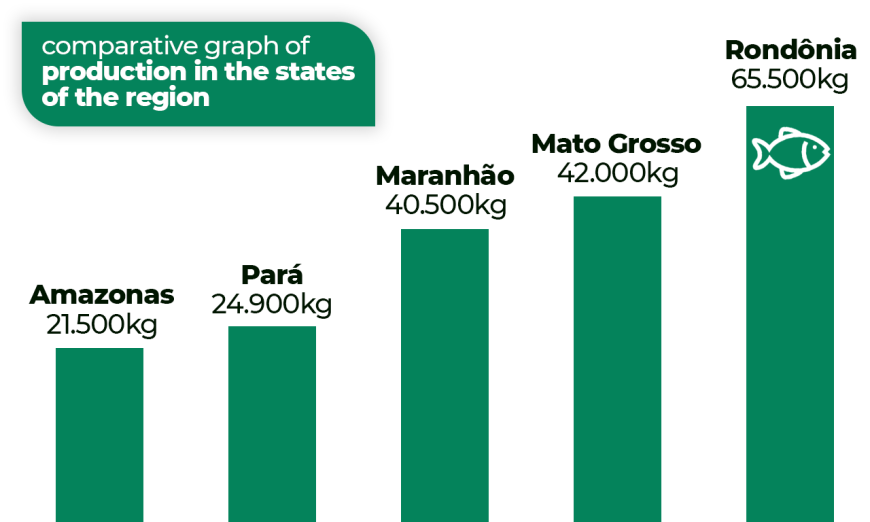 The production of tambaqui represents 90% of the state production, followed by jatuarana 6%, pintado 2% and pirarucu 2%.

Today, Rondonia is the leader in the national production of tambaqui.

The tambaqui fish occupies the third position in fish exports from the country.

Rondonia exported from January to July 2021, 121 tons of tambaqui, adding up to a total value of more than U$ 200 thousand dollars.

Peru and Bolivia are the main countries that receive the products.